Iggy Pop And The Surprising Gravity Of A Seemingly Inconsequential Decision 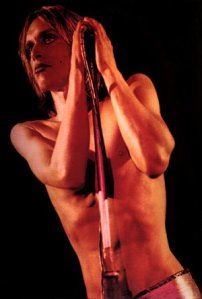 Sunday was the twentieth anniversary of the bombing of Pan Am 103 over Lockerbie, Scotland, an event I vividly recall. As it was days before Christmas and most everyone was home on winter break, the house I shared with five roommates was empty. I think the only one still in town was at his gig at Pizza Hut.

I was bound by my job at a record store to remain in town until Christmas Eve and I had closed the store earlier that evening. It was late and I was channel-surfing when I heard the news from Lockerbie.

Now when I hear of that event, I think of the girl I almost knew who had been saved from being on Pan Am 103 by Iggy Pop.

Five years after the Lockerbie bombing, four years after I had graduated from college, I was the buyer at a large record store and The Mogul (as our group of friends had dubbed him) was one of my closest friends. He was a rising star working for a major label.

One day, I mentioned a band, The Situation, that was popular in my college town while I was in school. I was likely recounting how my friend Shafia had been the inspiration for one of their songs – Shafia Has A Dilemma – which they continually updated to reflect Shafia’s usual chaotic state of affairs. She provided them with ample material.

Shafia was quite taken with Craig, who seemed to be The Situation’s de facto leader. However, there was some drama involving another musician, Trina, who I took as the mortal rival of Shafia for Craig’s attentions. Shafia scorched my eardrum on a number of occasions with rants on the matter. I never personally met Trina.

As I told The Mogul this tale, we began to connect the dots. Even though he attended college in Maine and The Situation and I had been in Indiana, he knew of them. Odd, as, to my knowledge, they were a regional band.

Furthermore, The Mogul knew Trina as she had dated a close friend of his while they were studying in London. He had known Trina two years before I had even met Shafia. He told me how Trina had been booked on Pan Am 103, but she hadn’t been on the flight.

Apparently, Trina had blown off the flight, deciding to stick around the city to see an Iggy Pop show.

Living with that experience has to be a strange thing.

Iggy Pop – Livin’ On The Edge Of The Night

This entry was posted on Monday, December 22nd, 2008 at 11:57 pm and is filed under decisions, Iggy Pop, Lockerbie, six degrees of separation. You can follow any responses to this entry through the RSS 2.0 feed. You can leave a response, or trackback from your own site.