The Spirit Of Gordon Gecko Is Alive And Well 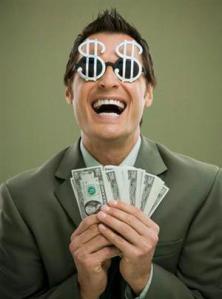 This evening, Dubya addressed the nation on the latest calamity to occur on his watch. Of course, these calamities seem to occur with the same dizzying frequency at which Pac-Man Jones used to get into legal scuffles.

The elderly woman who sold me cigarettes the other morning asked how I liked living in a Socialist country (as her cohort shook her head in obvious disapproval). If my head hadn’t been pounding with an intensity that was close to compromising the structural integrity of my skull, I might have actually voiced the reply which came to mind – “I always thought Paloma and I might end up in Italy.”

I did study finance and economics, but for the first fifteen years out of college the closest I came to using my degree was to occasionally balance my checkbook. So, I have only the slightest idea exactly what these clowns have gotten the country into or how they intend to get us – or some of us – out. It does have a vibe that conjures images of rats scrambling to flee a sinking ship.

A bunch of Wall Street characters and banks made a lot of money doing dodgy deals. People took on more financial responsibility than they could handle. Essentially, a good number of folks decided they needed more than they had (and, among those numbers, there are many who could be considered well off).

This need for more seems to be pretty hard-wired into us, doesn’t it? That’s not the kind of thing that’s going to be solved by throwing a bunch of money at it (though that certainly seems to be what is going to happen).

And I couldn’t bring myself to watch Dubya’s address, so I’ve opted for highlights of the Oakland/New England “Tuck Rule” game on ESPN2.

This entry was posted on Thursday, September 25th, 2008 at 1:42 am and is filed under Bob Marley, financial meltdown, greed, Jane's Addiction, money, The Motels, Tricky. You can follow any responses to this entry through the RSS 2.0 feed. You can leave a response, or trackback from your own site.